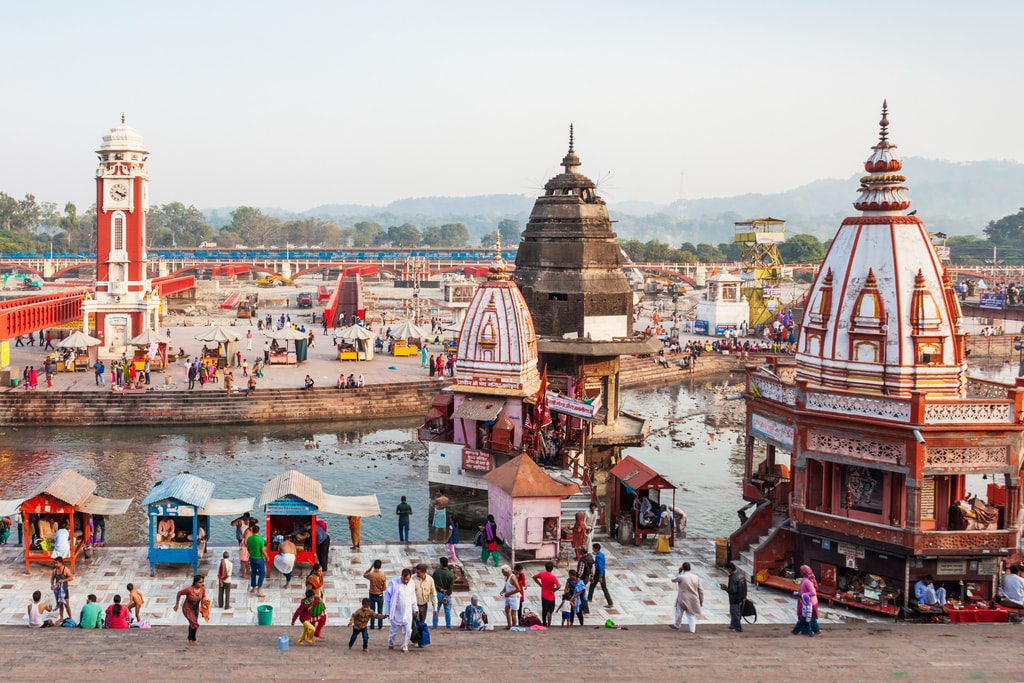 Haridwar - About Haridwar Haridwar taxi service Haridwar is considered as the abode of God and also as the holy land. It is considered as the entrance to the four pilgrimages, which are in the Uttarakhand. The major reason for the popularity is the mythological belief that it is the place that has been blessed by the Lord Shiva, Vishnu and Brahma. It is situated on the foothills of Shivaliks and on the riverbanks of River Ganga. This city of holy Ganges has been an ancient.

Haridwar is one of the seven holiest Hindu places in India usually considered as the holiest place where Moksha, final release can be obtained. Haridwar is also the first step of Chardham Tour. These are Haridwar, Ayodhya, Mathura, Puri, Varanasi, Kanchipuram, Ujjain and Dwarka.

According to mythology, 'Devas' (Gods) and 'Asuras' (Demons) churned the ocean (Samundra Manthan) to obtain Nectar (Amrita). And when the coveted 'Kumbha' (pitcher) of Nectar (Amrita) which gave immortality was obtained from the depths of the ocean, was one of fourteen ornaments that came out from the Samundra Manthan. One of the 'divas whisked away the 'Kumbha' from the 'Asuras' and evading from the 'Asuras', stopped at four places viz. Hardwar.

According to astrologers, the 'Kumbh Fair' takes place when the planet Jupiter enters Aquarius and the Sun enters Aries. This is manifested in the Kumbha Mela being celebrated every 3 years in one of the 4 places, and thus every 12 years in Haridwar. The 'Kumbh' and the 'Ardh Kumbh' fairs are held periodically, every twelfth and sixth year in Hardwar, when a large number of pilgrims and devotees converge to commemorate this divine event. Amidst

In the Ved and Puranas it has been mentioned as Kapilsthan, Gangadwar and Mayapuri. It is also an entrance point to the Char Dham (Badrinath, Kedarnath, Gangotri, and Yamunotri), Therefore both Shaivaites (followers of Lord Shiva) and Vaishnavites (followers of Lord Vishnu) visit this place. The famous King, Bhagirath, the great-grandson of the King Sagar is said to have brought the river Ganges from heaven, by years of penance in Satya Yuga, for the (salvation) of 60,000 of his ancestors from the curse of the saint Kapila, a tradition sustained by thousands of Hindus, who brings the ashes of their dead family members, in hope of their Moksha.

Haridwar came beneath the ruling of the Maurya kingdom (322–185 BCE), and later under the Kushan kingdom (c. 1st–3rd centuries). The town also fell under the rule of Timur Lang (1336–1405).First Sikh Guru, Guru Nanak (1469–1539) bathed at 'Kushwan Ghat', his visit took place on the Baisakhi day in 1504 AD. Pundits of the Haridwar have been famous for keeping family tree records of the Hindu people. Famous as vahis, these records are updated on their visit to the city.

what is Famous Festivals in Haridwar?

Kumbh Mela : Once every twelve years it is the venue for the, humanity's largest festival, which drew a record 70 million in 2003. (The festival rotates between Haridwar and Allahabad, Ujjain and Nashik.) The Ardh Mela, or "half mela", is held every six years. The last Maha Kumbh Mela was in 2010, and the next Ardh Mela will be in 2016.Kumbh Mela is a mass Hindu pilgrimage in which Hindus gather at the Ganges The Ardh (half) Kumbh Mela is celebrated every six years at Haridwar and Allahabad, the Purna (complete) Kumbh takes place every twelve years, at four places Allahabad, Haridwar, Ujjain, and Nashik.

Haridwar hosted the Purna Kumbha mela from Makar Sankranti (14 January 2010) to Shakh Purnima Snan (28 April 2010). Millions of Hindu pilgrims attended the mela. On April 14, 2010, alone approximately 10 million people bathed in the Ganges river. According to officials by mid April about 40 million people had bathed since January 14, 2010. Hundreds of foreigners joined Indian pilgrims in the festival which is thought to be the largest religious gathering in the world.

Baisakhi : Held in April month on the ocassion of baisakhi. One of the biggest festivals of sikh religion. Attracts thousands of people.

Kanwar Mela : In July, The largest yearly festival, drawing up to 300,000 visitors. In the sacred month of Shravan (Saawan) (July -August) devotees of Shiva known as Kānvarias comes to fetch holy waters of Ganges River( Ganga Jal)from Haridwar, Gaumukh and Gangotri in Uttarakhand which is later presented at their Shiva temples.they mostly travel the distance on foot and a very few on bicycles, motor cycles, scooters, mini trucks or jeeps.

Somwati Amavasya : In July, Almost as large as the Kanwar Mela. Amavasya of any month which falls on Monday is called Somvati Amavasya. It is specially known for the Tarpan of ancestors.

Kartik Purnima : Held 15 days after Diwali on the first night of the full moon in November.

How To Reach Haridwar?

By Railway : The Haridwar Railway Station located in Haridwar is under the control of the Northern Railway zone of the Indian Railways. It has direct links the major cities of India such as Delhi, Mumbai, Kolkata, Chennai, Indore, Jaipur, Ahmedabad.

Ans : The foreigners are very happy with the Ganga Aarti in Haridwar. And understand the importance of ashram in Haridwar. That's why he likes Haridwar.

Q 2:-When kumbh mela is coming in Haridwar?

Q 3:-What is oldest temples in Haridwar?

Ans:By the way, many temples in Haridwar are old. But Daksha Temple & Bilkeshwar temple is oldest temple in Haridwar.